Devotion to the Holy Face of Jesus

Prayer Carmelite Devotions Devotion to the Holy Face of Jesus

Devotion to the Holy Face of Jesus

Saint Therese was introduced to the devotion by Sister Agnes of Jesus. She studied it in a personal way, using the texts of Isaiah (see below). She did this principally at the time of her father’s illness. She signed her name for the first time as “Sister Therese of the Child Jesus and the Holy Face” the day she received the habit on January 10, 1889. Before her death on September 30, 1897, after she was taken to her infirmary bed, she “pinned her favorite holy pictures on the brown curtains surrounding her bed…The Holy Face of Jesus, the Blessed Virgin, her `dear’ Theophane Venard…”

Quotes from St. Therese on the Holy Face

“The little flower transplanted to Mount Carmel was to expand under the shadow of the Cross. The tears and blood of Jesus were to be her dew, and her Sun was His adorable Face veiled with tears. Until my coming to Carmel, I had never fathomed the depths of the treasures hidden in the Holy Face. It was through you [Agnes] dear mother, that I learned to know these treasures. Just as formerly you had preceded us to Carmel so also you were the first to enter deeply into the mysteries of love hidden in the Face of our Spouse. You called me and I understood. I understood what real glory was. He whose kingdom is not of this world (John 13:36) showed me that true wisdom consists in `desiring to be unknown and counted as nothing’ (Imitation of Christ, 1, 2-3) in placing oneself one’s joys in the contempt of self.’ (Ibid, 49:7) Ah! I desired that, like the face of Jesus, my face be truly hidden, that no one on earth would know me (Isaiah 53:3). I thirsted after suffering and I longed to be forgotten.” —The Last Conversations.

These words of Isaiah, ” Who has believed our report?…There is no beauty in Him, no comliness…” have been the whole foundation of my devotion to the Holy Face, or, to express it better, the foundation of my whole piety. I also have desired to be without beauty, to tread the winepress alone, unknown to every creature.” – The Last Conversations 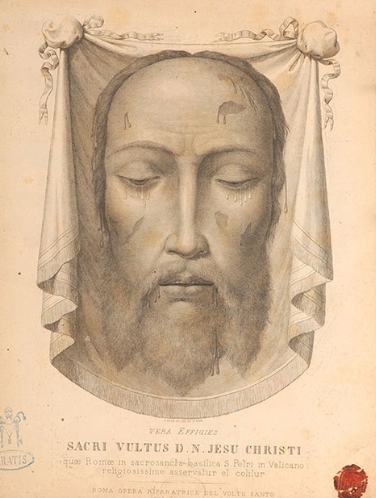 St. Therese’s Sister’s Image of the Holy Face after the Shroud of Turin
One year after Saint Therese’s death in 1898, the photographer Secondo Pia took the first photos of the Holy Shroud of Turin and made an incredible discovery. The dark yellow shadows visible on the linen cloth turned out to be a photographic negative — when on the negatives the photographer developed, the “positive” image of a man who underwent incredible sufferings appeared. He realized that the image on the shroud was not a painting, not a forgery, but a supernatural photo, created in the moment of His glorious resurrection. Pia’s photos were published in newspapers worldwide, and a Frenchman, M. Guerin, wrote a book on the discovery: Le Linceul du Christ (The Linen of Christ). During this time of reading, Sister Genevieve of the Holy Face had a vision. She heard Saint Therese speak the following to her: “Paint Him, paint a new Holy Face, paint Him as He was!” Sister Genevieve was an excellent painter. She spent hours praying and meditating in front of the prints of Seconda Pia’s photos of the Holy Shroud. Then she started to paint. She decided to use the iconography of Veronica (or “Holy Face”) and just used a charcoal pencil. In 1904, she decided to print a limited number for visitors of the Carmel and other Carmels in France, Belgium, the Netherlands and Italy. They have the imprint “Carmel de Lisieux” and the year, 1904. 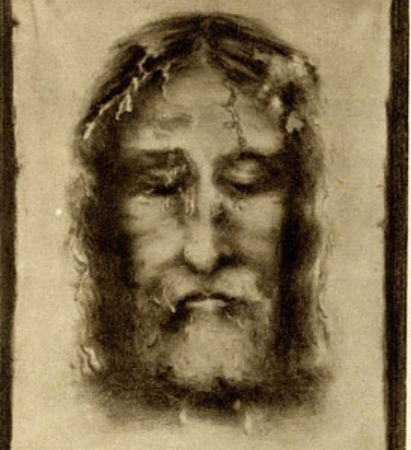 St. Therese’s Prayer to the Holy Face
O Jesus, Who in Thy bitter Passion didst become “the most abject of men, a man of sorrows,” I venerate Thy Sacred Face whereon there once did shine the beauty and sweetness of the Godhead … but now it has become for me as if it were the Face of a leper! Nevertheless, under those disfigured features, I recognize Thy Infinite Love and I am consumed with the desire to love Thee and make Thee loved by all men.

The tears which well up abundantly in Thy Sacred Eyes appear to me as so many precious pearls that I love to gather up, in order to purchase the souls of poor sinners by means of their infinite value. O Jesus, Whose adorable Face ravished my heart, I implore Thee to fix deep within me Thy Divine Image and to set me on fire with Thy Love, that I may be found worthy to come to the contemplation of Thy glorious Face in Heaven. Amen.

Jesus, Your ineffable image is the star which guides my steps. Ah, You know, Your sweet Face is for me Heaven on earth. My love discovers the charms of Your Face adorned with tears. I smile through my own tears when I contemplate Your sorrows.

Jesus, Your ineffable image
Is the star which guides my steps.
Ah, You know, Your sweet Face
Is for me Heaven on earth.
My love discovers the charms
Of Your Face adorned with tears.
I smile through my own tears
When I contemplate Your sorrows.

Oh! To console You I want
To live unknown on earth!
Your beauty, which You know how to veil,
Discloses for me all its mystery.
I would like to fly away to You!

Your Face is my only homeland.
It’s my Kingdom of love.
It’s my cheerful meadow.
Each day, my sweet sun.
It’s the Lily of the Valley
Whose mysterious perfume
Consoles my exiled soul,
Making it taste the peace of Heaven.

It’s my Rest, my Sweetness
And my melodious Lyre
Your Face, O my Sweet Savior,
Is the Divine Bouquet of Myrrh
I want to keep on my heart!

Your Face is my only wealth.
I ask for nothing more.
Hiding myself in it unceasingly,
I will resemble You, Jesus
Leave in me, the Divine Impress
Of Your features filled with sweetness,
And soon I’ll become holy.
I shall draw hearts to You.

So that I may gather
A beautiful golden harvest,
Deign to set me aflame with Your Fire.
With Your adorned mouth,
Give me soon the Eternal Kiss!