Her mother’s inspiring suggestion after losing twelve sons in infancy.

“ Let us go to Bethlehem on foot, and ask the Blessed Virgin for a daughter. Let us promise her that if our prayers are answered, we will name her Mariam and will offer for the service of God a quantity of wax equal to her weight when she is three years old.”

Mariam Baouardy was born of the eve of Epiphany in Abellin, in upper Galilee into a Lebanese family belonging to the Greek-Melkite Catholic Church Her brother, Paul was born two years later. -Mariam “The Little Arab” 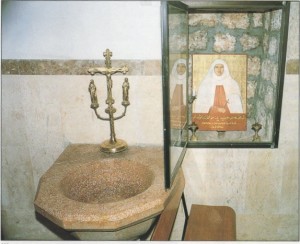 Her parents died within a few days of each other. She was adopted by her uncle, her brother by an aunt. The brother and sister were never to see each other again.

An aunt related to Marian her Father’s last words. Looking at a picture of St.Joseph, he had murmured: “Great Saint, here is my child; the blessed Virgin is her mother; deign to look after her also, be her Father.” –-Mariam “The Little Arab”

Known as a dreamer, a thoughtful child, she never attended school or learned to read or write. This absence of education only heightened her consciousness of the interior life and reflection.

After playing in her uncle’s orchard with a cage of little birds she gave them a bath and they died. Heart-broken, she was burying them when in the depths of her heart a very clear voice uttered “ This is how everything passes! If you give me your heart, I shall always remain with you!” -Mariam “The Little Arab” 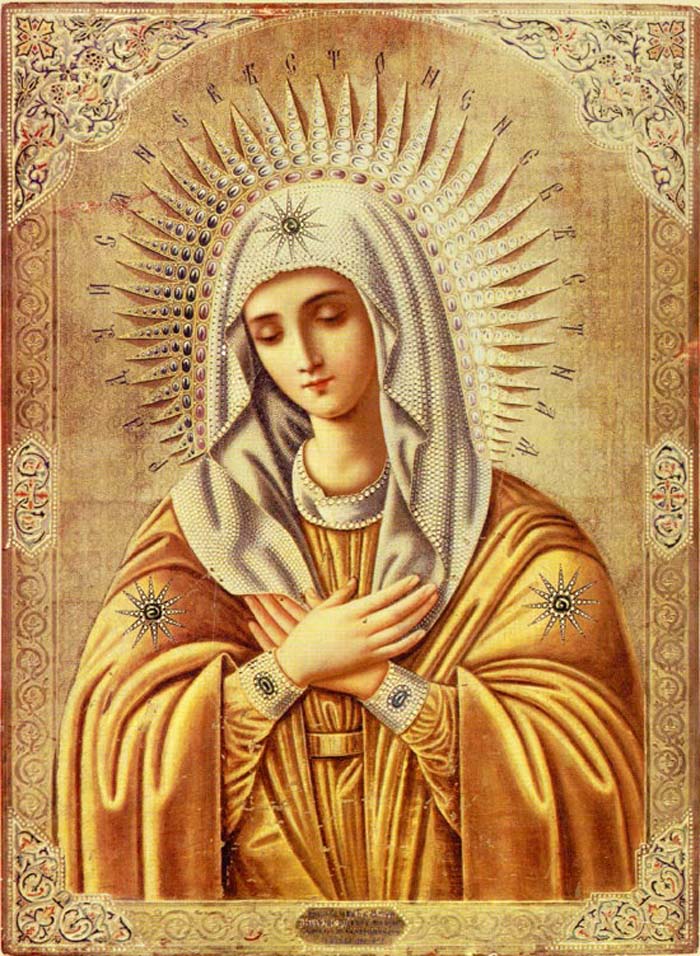 At eight years old her Uncle moved family to Alexandria and at twelve she is betrothed to her aunt’s brother.

“ Mariam spent the night before her wedding in prayer before an Icon of the Blessed Virgin Mary. Having dozed off for a moment she heard the same voice murmur,

“ Mariam, I am with you: follow the inspiration I shall give you; I will help you.”

Upon wakening with joy she cut her long braids and entwined them with jewels she had received from her fiancé and stated she wanted to remain a virgin consecrated to Jesus Christ. Her uncle enraged made her a servant in his home. -Mariam “The Little Arab”

Three months later, desirous of seeing her brother, she leaves her uncle and seeks to travel with a former Muslin house servant going to Nazareth to find him.

The Muslim, after hearing about her family’s treatment of her, said she should convert to Islam. Her faith-filled response infuriated him and unable to control himself he slashed her throat. Believing her dead he wrapped her in a cloak and with the help of his wife and mother, deposited her in an alley. -Mariam “The Little Arab”

September 8-1858 Miracle from Our Lady

After a vision of heaven, Marian found herself in a grotto. A religious in azure clothing had stitched her neck and was tenderly caring for her.

Toward the end of her care the ‘nurse’ outlined her life’s program:

“You will never see your family again; you will go to France, where you will become a religious. You will be a child of St. Joseph before becoming a daughter of St. Teresa. You will receive the habit of Carmel in one house, you will make your profession in a second, and you will die in a third, at Bethlehem.”

Sometime later she recounted to her spiritual director, “I know now that the religious who cared for me after my martyrdom was the Blessed Virgin.”

As a result of this deep cut, Mariam’s voice was always hoarse. The scar, marked the whole front of her neck, and measured 10 cm. in length and 1cm. in width. Doctors later attested that several cartilaginous rings of the tracheal artery were missing. Mariam “The Little Arab”

After various maid-servant positions in Alexandria and Jerusalem, she settled in Marseilles. At eighteen, her confessor directed her to the Sisters of St. Joseph of the Apparition at Capelette.

In January of 1866, the postulant now 20 years old, called ‘the little Arab’, began having ecstasies and from Wednesday evening to Friday morning each week the ecstasies added a curious phenomenon: the Stigmata. 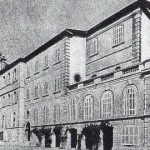 From the memoirs of Mother Veronica-

“On the first Thursday, May 2, 1867, when I went to see Mary, I found her sitting near her bed in great pain. She showed me her side, her feet and her hands. On these latter, in the place where they had been imprinted…there was a sort of blister… At the place in her side, a little above the heart, there was the form of a cross all red and swollen; and in the middle three small blisters…I spent the night near her and at five o’clock in the morning blood flowed from the wounds…About nine o’clock blood flowed from the crown of thorns, all about her head. After three hours she was completely herself again.”

Marian prayed, “My God, do not permit this to be seen. I accept all the thorns in my heart; but tell the Master of the rosebush to hide the roses.” -Mariam “The Little Arab”

Due to these strange manifestations, Marian is not accepted as a novice in St. Joseph’s active community. The Superior General writes to the Prioress of the Carmel of Pau.

“Our ecclesiastical superiors did not believe we should keep her in our midst saying the cloister had the privilege of hiding such souls. Our sisters obeyed. You now have this privileged soul. May God be praised for it! ”

“To see her, one would not have thought her more than twelve years of age. Her small stature, her candid face, her difficulty in expressing herself in our language, her profound ignorance of everything, for she could not read Arabic or French; all this contributed to her child-like character…However, surprisingly, she joined with that simplicity the greatest wisdom, an upright spirit, delicate judgment, much discernment, and the experience of an older person. If she did not possess acquired talents, we were not long in being convinced that her heart and her spirit were rich in gifts that produce great souls

Love of the Holy Spirit

“This dear child has an extraordinary devotion to the Holy Spirit. When she speaks of Him, it is with burning expressions and her whole exterior is lit up by it. In one ecstasy, she heard this prayer, which has gone around the world.”

Love of God, consume me.

Along the true road, lead me.

Mary, my mother, look upon me.

With Jesus, bless me.

From all evil, form all illusion,

from all danger, preserve me.” 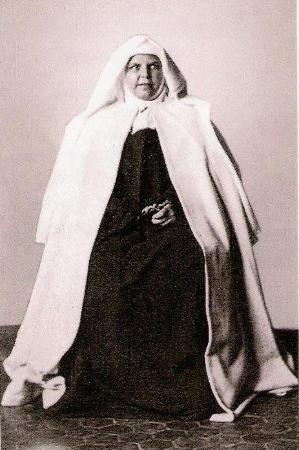 “ Near me, on the left side, I saw an angel in corporeal form. He was not large, but small and beautiful. I saw that he held in his hand a long dart of gold, the iron tip of which I believe held a little fire. It seemed to me he plunged it several times through my heart…When withdrawing it one would have said that this iron …left me wholly inflamed with an immense love of God. “

On August 21, 1870 a small group of Carmelite nuns sail for India to found a monastery in Mangalore. Sr. Mary of Jesus Crucified had requested to be part of this group.

Of the six that left only three survived the trip. Reinforcements were sent and the Carmel was established. The novice received unanimous votes and made her profession of vows on November 21st. She remained there only two years.

From the time of her return from Mangalore, Sr. Mary of Jesus Crucified dreamed of a Carmel in Bethlehem.

One day when the Lord was renewing His confidant the assurance of the foundation, she boldly asked for a sign: “As a proof that this foundation of Bethlehem will be made and that I will go and die there, make this geranium leaf take root.” With that she thrust the leaf she was holding in her hand into a pot filled with soil. The sign was granted: soon after a magnificent geranium grew up from that leaf. She called it Jeremiah.

The foundation was sponsored by a benefactor, Berthe Dartigaux.

Sr. Mary of Jesus Crucified- regarding the foundation: “ The monastery will not be built in the city, but in a low mountain facing Bethlehem. The Lord said:” where My father David was born.’ I will not live to see it completed. Before it is finished I will go to heaven.” -Mariam “The Little Arab” 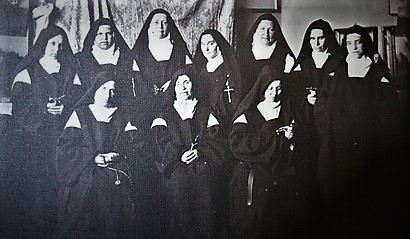 A heavenly sign had been shown Sr. Mary to mark the site of the monastery… a flight of pigeons settled on a desert hill. This hill is known as the hill of David.

After the acquisition of the ground God dictated His plans. On five occasions, Jesus revealed His project. With the help of Sr. Veronica she got the plan on paper. In her visions she saw Jesus inspecting the work. Being the only Carmelite to speak Arabic, she was appointed by the Prioress as superintendent of the workmen. The workmen venerated her. -Mariam “The Little Arab” 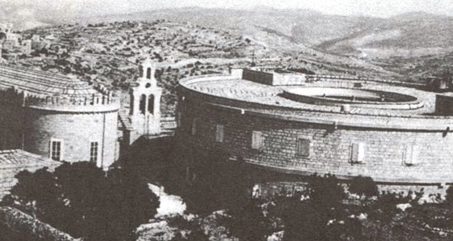 In the mind of Sr. Mary, the Carmel of Bethlehem was a fortress of the south for Palestine…She dreamed of another fortress for the north in Nazareth.

She expressed her plan to the Patriarch of Jerusalem and in 1877 he obtained authorization from the Pope to buy a piece of Land. This Carmel was actually finished in 1910.

On August 22nd, while carrying two buckets of water to the workmen, she fell over a box of geraniums and fractured her arm.

Carried to the infirmary, she said, “It is a signal of the end. I am going to Jesus.” On the Feast of the Transverberation of St. Teresa’s heart, a little after 5 a.m., while the Angelus was being sung, she went home to God. 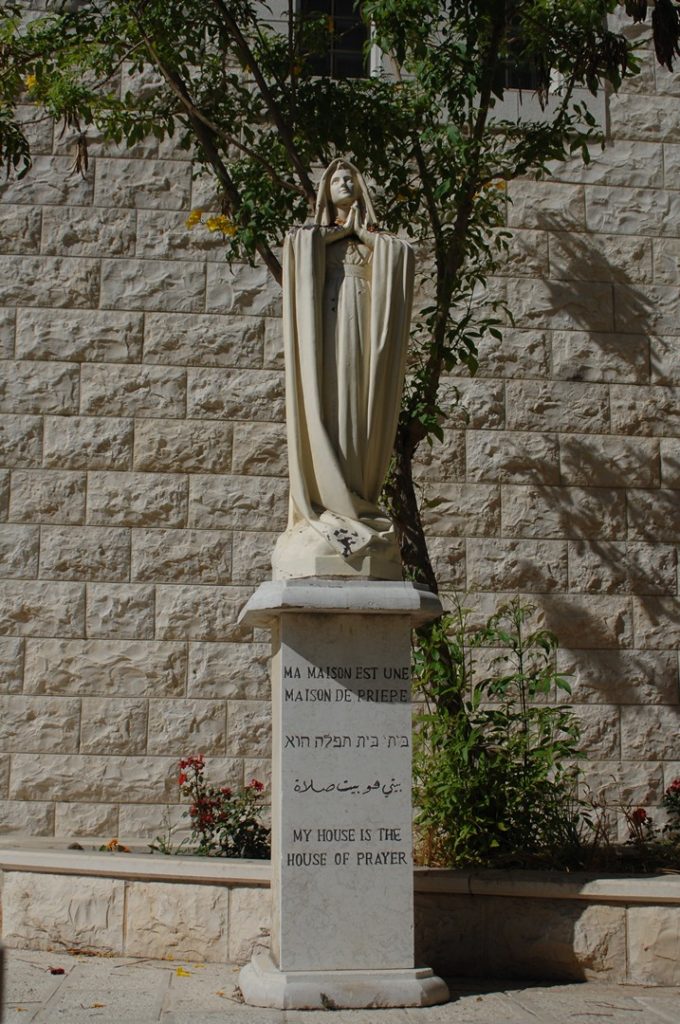 Three other religious women were canonized with St. Mary of Jesus Crucified.

“From this eternal love between the Father and the Son, poured into our hearts through the Holy Spirit (cf. Rom 5:5), our mission and our fraternal communion draw strength; this love is the ever-flowing source of our joy in following the Lord along the path of his poverty, his virginity and his obedience; and this same love calls us to cultivate contemplative prayer. Sister Mariam Baouardy experienced this in an outstanding way. Poor and uneducated, she was able to counsel others and provide theological explanations with extreme clarity, the fruit of her constant converse with the Holy Spirit. Her docility to the Spirit also made her a means of encounter and fellowship with the Muslim world.” -Taken from Pope Francis’ Canonization Homily 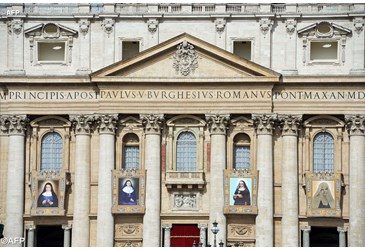 God is hidden in the soul like seed in the apple.

In heaven, the most beautiful souls are those that have sinned the most and repented. But they made use of their miseries like manure around the base of the tree.

Always remember to love your neighbor; always prefer the one who tries your patience, who tests your virtue…

Pay attention to little things. Everything is great before the Lord.

I just thread the needle; it is God who does everything.

Be very charitable; when one of your eyes sees what is not right, shut it and then open the other one! Change everything into good.

The whole world is asleep, and God so full of goodness, so great, so worthy of all praise, and hardly anyone is thinking of Him! See, nature praises Him, the sky, the stars, the trees, the grass, everything praises Him; and humankind, who ought to praise Him, sleeps! Let us go, let us go and wake up the universe!